Skip to content
SharePoint vs Microsoft Teams, or is it both?

Anyone who says there’s no psychology in IT and adoption needs to think again. In this blog, we will contrast SharePoint vs Microsoft Teams and what you need to know about each.

Let’s take a step back. 18 months ago, we struggled to get users to adopt SharePoint. And when I say “adopt” I don’t necessarily mean evangelists, running the hallways in Microsoft T-Shirts, shouting “SharePoint forever!” I would have been happy with users who at least uploaded their content there, even if it was with a heavy heart.

I am not oblivious to the fact that SharePoint was a bitter pill to swallow – for most. I understand why too. If my place of work is Outlook, Word, Excel (my desktop) and the Department File Share then navigating to a browser, going to a URL, navigating through a site to get to my Document Library, and then going through the painful process of uploading my documents is the last thing I want to do. Yes, it’s gotten easier with the ability to Sync Libraries and the Save As features in Microsoft Office, but most people don’t use this or even know about it.

A new way of working

Sometimes I wish we had ‘air tubes’ which we could just throw our documents in, and they would get sucked up into SharePoint. I’m referring to the pneumatic tubes used years ago by so many companies. You wouldn’t have to get up and go anywhere, or leave the program you’re in to open the browser to do something else… oh wait we do!

Pneumatic tubes (or capsule pipelines; also known as pneumatic tube transport or PTT) are systems that propel cylindrical containers through networks of tubes by compressed air or by partial vacuum. They are used for transporting solid objects, as opposed to conventional pipelines, which transport fluids. Pneumatic tube networks gained acceptance in the late 19th and early 20th centuries for offices that needed to transport small, urgent packages (such as mail, paperwork, or money) over relatively short distances (within a building, or at most, within a city).

Since Microsoft Teams was launched in November 2016, I’ve heard many people say that it’s better than using SharePoint, and now they don’t need SharePoint anymore.

This is not true at all. The example I used above is closer to the truth than you realize. The tubes are the channels in Teams – and wherever that ‘content’ goes is SharePoint. It’s rather ingenious if you ask me.

What happens when a Team is created?

This Office 365 Group (created from Microsoft Teams) gives us a common SharePoint site, OneNote, Power BI workspace, Plan(ner), shared Mailbox & Calendar and a Group in Stream to apply permissions with (not a channel).

Thus, you have a SharePoint site with the same name as your Microsoft Team, and on that SharePoint Site, is a document library.

This document library is what sits “behind” your Files Tab in your Microsoft Team.

A Team is created with a General Channel by default. We are then able to add more Channels which helps us focus our conversations and categorizes our documents.

Each Channel that gets created, creates a folder in the SharePoint Document Library. Whether you upload the document straight ‘into’ the Files Tab on the Teams Channel, or simply attach it to a conversation in the Team Channel – it uploads it to SharePoint, to the appropriate folder. 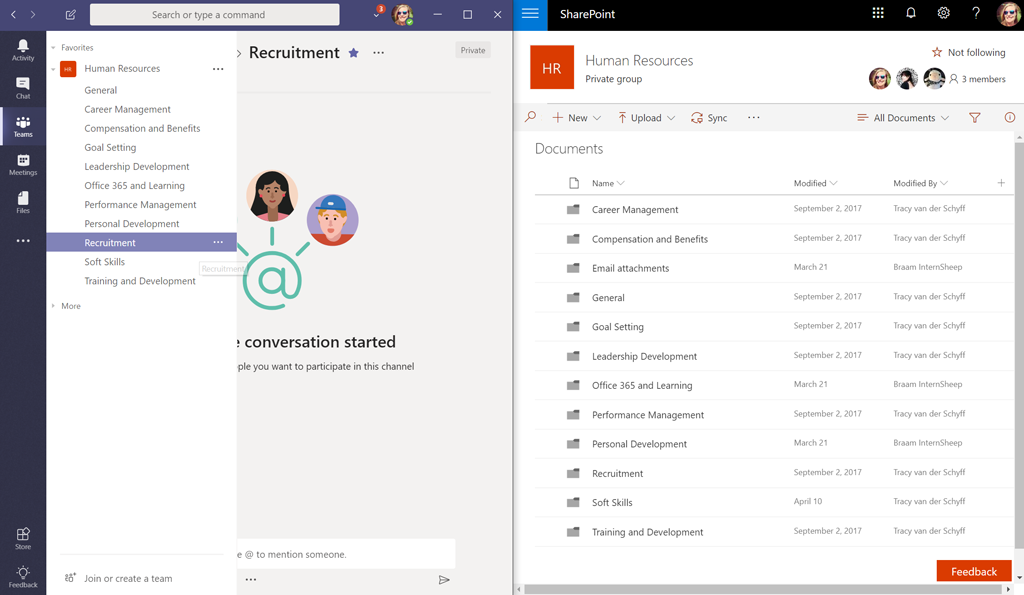 Keep the following in mind:

Take a look at our other blogs around Microsoft Teams:

How to use Microsoft Teams: Putting the team back in teamwork

Learn Microsoft Teams security best practices on how to configure Teams for maximum collaboration, while keeping your data, apps and meetings secure.

Microsoft Teams guest access allows external users to access Teams. Learn how it works, key permissions and the best ways to use it.